We rode several early-season rides, including the Wicked Wind 100 in May.  Kind of a long, flat route.  We finished in good time and felt pretty good about this idea of a fixed gear tandem.

We rode the middle day of the Cottonwood 200 on Memorial Day weekend.  We thought this hilly route would be a good test:  if we could do this, we wouldn't have a problem on Biking Across Kansas.

In June, we took this bike on BAK.  Turned out to be one of the hillier BAK routes possible.  We ended up flipping the wheel over to the freewheel side about 25% of the ride.  Still, it felt good. 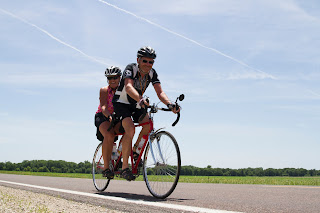 For July's RAGBRAI, predicted to be hilly, I converted it to a five-speed machine. 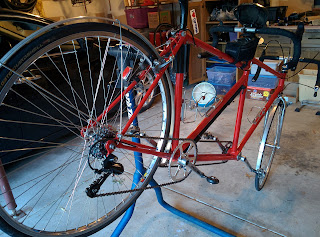 This worked *really* well.  I think the rear cluster goes 14-17-20-24-28 and there's a single 46 tooth chainring cranking it.  We got up and down and up and down the hills pretty happily.

Prep for Hotter 'n Hell in Wichita Falls, TX included turning it back into a fixed gear machine.  We had a dandy ride that day;  it's an ideal course for a single-speed bike.

Come October and Octoginta, I turned it back into a five-speed to more easily handle the hills around Lawrence, KS.

After that, it went back to being a fixed gear bike for winter '16 and spring '17.

I just had to find a place to park these stories.  fixedgeartandem.com wasn't taken, so I took it.

We had our first serious consideration of that notion when we saw a 70's Fastab Miura tandem sitting in a storage room in a friend's soon-to-be-sold house.  Melanie negotiated a rescue mission and the project began. 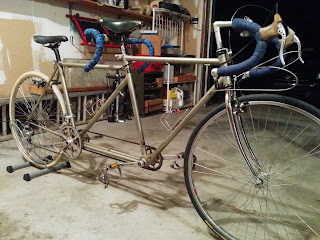 Yeah, I call it "metallic beige".

It really couldn't be ridden.  Everything about it screamed cobbled together.  However, it had a few good points:  Reynolds 531 tubing, long horizontal dropouts, TA Cyclotouriste cranks, and Campagnolo seat post binders.  Yeah, that's about it.

The work begins by taking it all apart.  This is the most satisfying part of the project in that it's hard to go wrong.  Everything will come off, eventually. 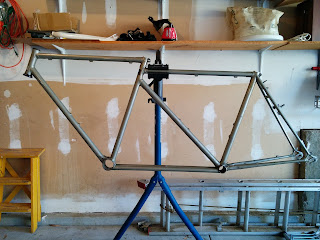 I took it to Lorac, the powercoating operation south of downtown Wichita.  It came back looking like this: 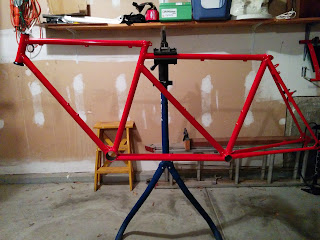 I ordered a custom Phil rear track hub with 48 holes so I could lace up a bona-fide tandem fixed gear wheel. 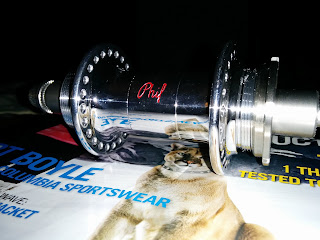 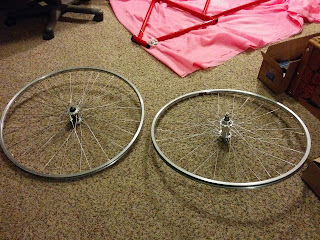 Bikes are like legos.  They're fun to build up and take apart.  Here's the build up: 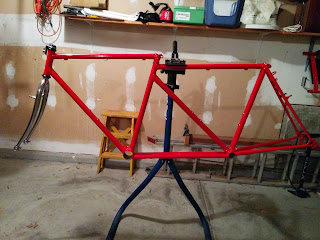 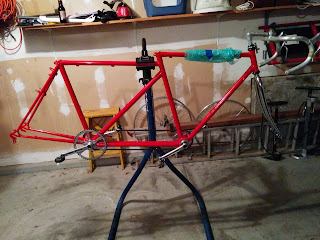 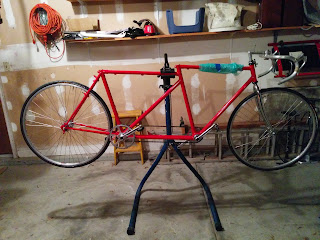 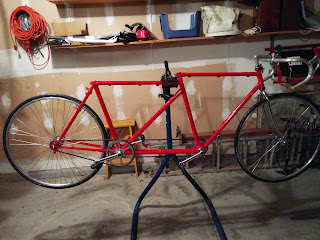 Some old parts, some new.  Many parts were found at the 2015 Velo Swap in Denver:  Sun Rims, Brooks Saddles, SPD and Frog Pedals, stoker handlebars, handlebar tape.  Some were purchased new, like the brakes, chains, cables, fixed cog.  By the end of January, 2016, it was road-ready. 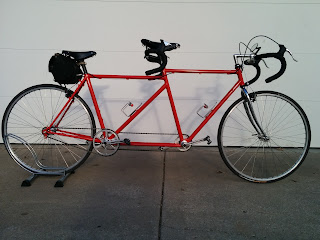